City of Cupertino Mayor, Rod G. Sinks, said at a March 19, 2015 ribbon-cutting ceremony for the project, "Cupertino Electric very swiftly and without incident" installed the solar system that we are "very, very happy with."

The Design/Build City of Cupertino project installed on the city's fleet service building is 103 kilowatts (kW) in size and represents the first municipal solar project built in Cupertino. The solar project's design uses aggregate metering to join two sites that are powered by the canopy-based system: the City of Cupertino service building where the system is installed and a large footbridge spanning Highway 280. String-level inverters were also used at the site, streamlining the design and eliminating the need for combiner boxes.

As part of the project scope, Cupertino Electric completed underground work, installed a step-down transformer and installed conduit intended for charging for the City of Cupertino fleet vehicles.

In its first year of operation, the 103 kW solar project is expected to save the city $25,000 in energy costs and will offset 74 percent of energy usage at the fleet service building. The project was built under a County of Alameda initiative that unites 19 Bay Area agencies building 186 separate solar projects for the purpose of leveraging the joint purchasing power and technical processes of the larger group. 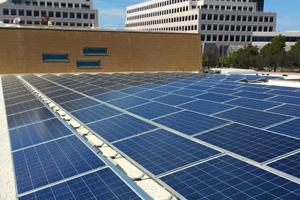